Design a site like this with WordPress.com
Get started

Since its mysterious reveal at E3 2013, many were wondering if The Order: 1886 would be a great new IP or just another story telling tech demo in the likes of Heavy Rain and other Sony experiments. The answer actually lies somewhere in between and it’s a complicated one at that.

She’s Got the Look

Let’s just get this out of the way now: The Order: 1886 is one of the best looking games I have seen in person. PlayStation 4 owners have been waiting for that one game that says “THIS is what next-gen consoles can do” and developer Ready at Dawn accepted the challenge with open arms. Sure, games like Killzone: Shadow Fall and Infamous: Second Son were fantastic examples of the power of the PS4, but many were still wondering where their Holy Grail was. If you want eye candy, The Order has you covered in spades.

Everything is incredibly detailed. At one point I stopped to take a screen shot of candles reflecting off of wood. Yes, it looks that good. London in 1886 is beautifully realized. Every nook and cranny. Every pot and pan. Every facial hair. Everything is detailed to the last pixel. My point, if you didn’t catch it, is that this game is a triumph in graphical fidelity.

Rebels, and betrayal, and werewolves, OH MY

The Order’s story was easily one of my biggest concerns going in. I knew it was a third person shooter with an emphasis on story, but how good was the story. Surprisingly, very, very good.

The Order has easily some of the best acting in games today and may have found a new star in one of many great actors. Most notably, Steve West’s portrayal of our hero Sir Galahad was phenomenal. Alice Coulthard also dominates scenes as Lady Igraine, even if she does breathe rather loudly. For those who think Troy Baker is the end all/be all, there are about 8 actors and actresses that give Mr. Baker a run for his money.

Galahad is one of the, presumably, 24 Knights of the Round Table with a head counselor directing traffic and making decisions. Without giving away too much, Galahad and friends face off against rebels — because there are always rebels– and werewolves. What is discovered throughout this great story is that there is, in fact, more to the rebels and Galahad is forced to question his beliefs in not only himself, but the Order for which he fights as he finds greater threats are at work.

The story works. The acting works. Most importantly, they work together. Even if the pacing can seem a bit jaunted from time to time.

My dad told me once that beauty isn’t everything. Sure, he was talking about women, but the concept still applies in just about everything in life; including video games.

Going into this experience, I left myself in the dark as much as possible as I felt going in virgin to the concept and story-line was my best bet for accepting a new IP onto my gaming shelf. I never had a very high hope of this game being 20 hours long and, in fact, prefer The Order’s 8 hour play time. In 8 hours, I explored, fought, and watch cut scenes now and again. And again. And again. Sure, the game is split between a couple hours of cut scenes and a few hours of gameplay, and the rest were QTE’s, but what’s mixed within was great.

My one major issue I had was the overall lack of exploration options. Developers, if I may have a moment: if you spend all of this time making a fully realized, albeit linear, world, make it worth it to the player to explore. Over the years, I have patterned myself to walk into an area and explore around looking for any and all collectibles, and then progress. It seems Ready at Dawn was ready to kill off my gaming habits but, unfortunately, it was more of an annoyance than anything.

With a beautiful world, I want to walk about and when I discover a new room, I want to unravel some sort of validation as to why this door was open or why there was a staircase leading somewhere. The Order mostly doesn’t abide by our preconceived habits and that isn’t a good thing.

What started off as me walking around searching for more back-story, turned into frustration as I’d walk into a beautifully decorated room and find only ammo. There’s plenty of ammo everywhere. What I did want was history of the world and its characters. Sure, there’s the occasional audio log, newspaper, or object to look at — you’ll rotate your wrist a lot — there still feels like there was something missing. The audio tapes only play in the menu breaking up the flow, newspapers were interesting but impossible to read, and rotating objects often yielded no results. It was a missed opportunity that I feel should have been addressed during quality assurance.

In a World of Werewolves, Gameplay is King

First and foremost, The Order is a third person cover based shooter. In fact, it plays like a very good one. But that is just what it is. A TPCBS (?) that puts you in a room that looks as though a fight will occur and then it does. Once the fight is over, you move on. It isn’t revolutionary but it works very well.

The weaponry made by the famous Nikola Tesla are some of the most badass guns I have used in a game. The lightning based gun Tesla creates feels solid and can create some “god damn!” moments as you watch whole limbs just get decimated. It. Is. Awesome. The most frustrating part is the rarity at which you get access to those guns. Lady Igraine starts with an arc cannon and Galahad has an everyday rifle. There’s no progression; merely you’re handed a gun at the will of the game.

There’s a couple of stealth, insta-fail parts but they’re not nearly necessary and often times incredibly frustrating. Like, to the point of screaming. If you are seen, you fail and start over. I really thought we were past that, but Ready At Dawn continues to surprise in the worst ways possible. 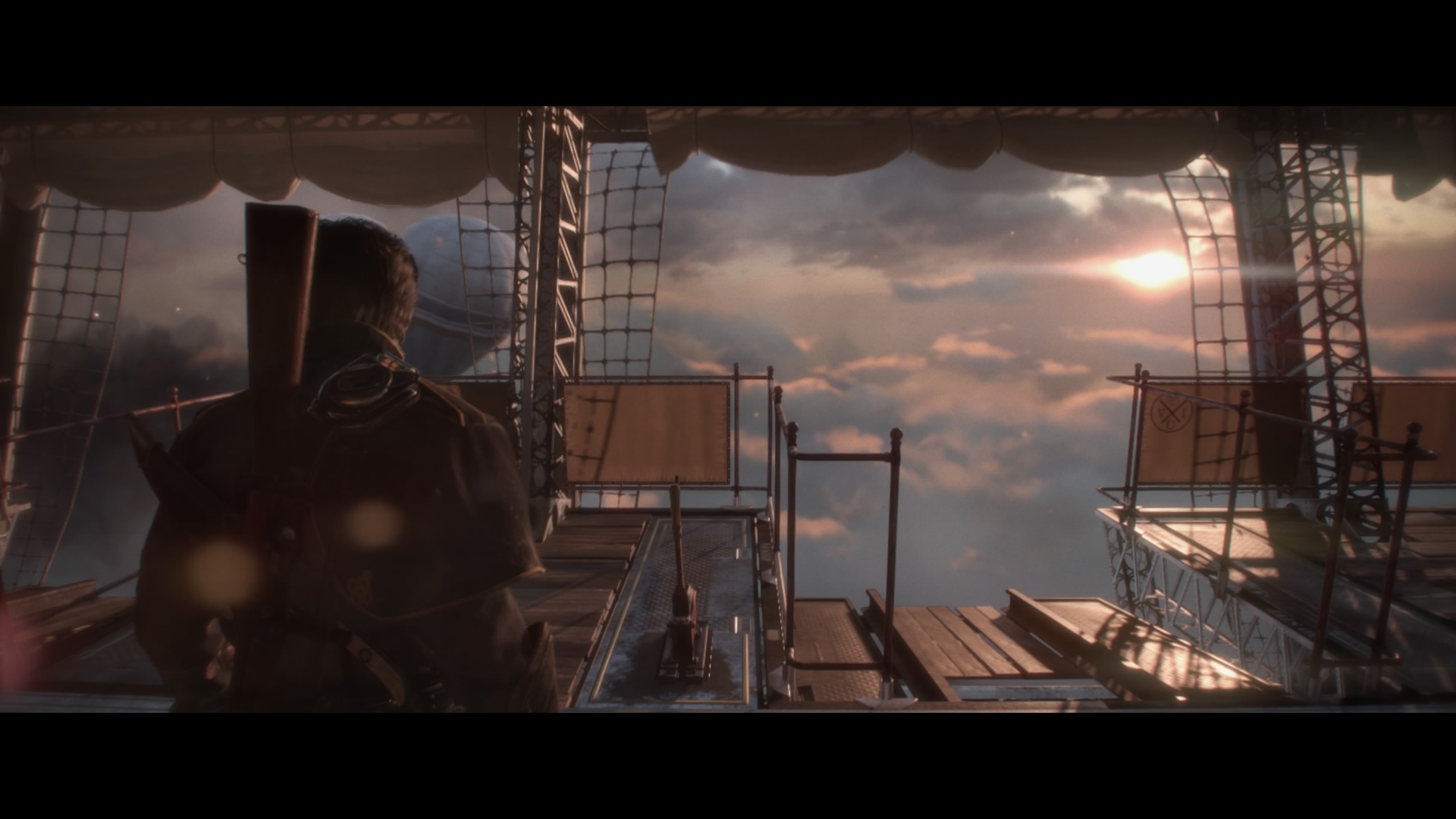 The zepplin stage is one of beauty

At one point I didn’t realize I was playing.

Are We There Yet?

Many shots in the game can be shrugged off as cutscenes 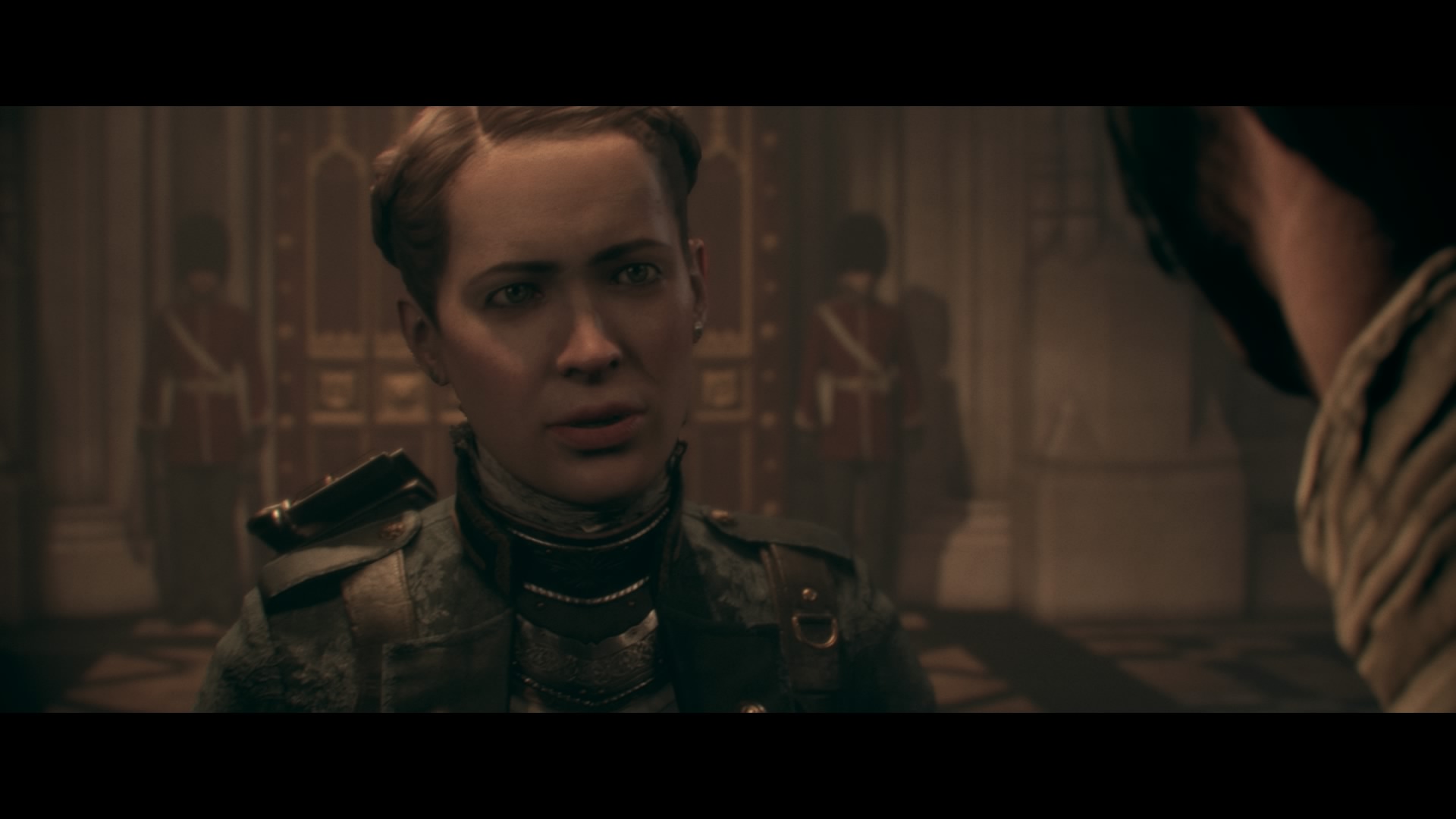 Press “triangle” to do everything

Though he had very little screen time

The lighting, reflection, and texture are spot on

The Order: 1886 is a gorgeous, well written, and well-acted story about everything from super natural events to politics and mostly dominates across the board. While it does lack in exploration and discovery, it is, in fact, a story. A story with fisticuffs, lightning guns, and button prompts mixed in that may turn some away.

For those who give it a chance, they will discover a great story with fantastic characters crammed into an 8 hour game. Is it worth $60? Not likely, but for those interested, just take it back to your local game store and get what you can from it when you’re done. It’s worth that much.

TJ uses AC current to make heads pop. He took his time and attempted to explore for roughly 8 hours on his PS4. Follow him on Twitter!